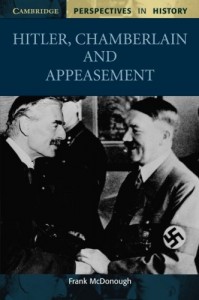 This book examines the key roles played by Adolf Hitler and Neville Chamberlain in the events that led to the outbreak of the Second World War. It looks at Hitler’s foreign-policy aims, why appeasement became British foreign policy and, most extensively, the role of Chamberlain and appeasement in the unfolding international crisis of the late 1930s. Using a wide range of primary sources, Frank McDonough offers a generally critical interpretation of Chamberlain and appeasement, and suggests that standing up to Hitler earlier may have prevented war. The book also features a detailed analysis of the historical debates surrounding the issue of appeasement.