Neville Chamberlain, Appeasement and the British Road to War 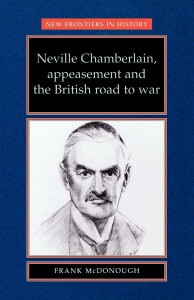 Re-examines the controversial policy of appeasement. The text suggests that the mood of the age in British society served to support appeasement, by analyzing the cluster of military, strategic, imperial and economic forces which served to justify it. The book argues that, when Neville Chamberlain came to power, appeasement was part of a broad consensus in British society to avoid a second world war. It provides an interpretation of Chamberlain’s conduct by showing how he used and abused the mood of the age to justify a selfish and ambitious policy which was idealogically prejudiced. Yet, when Hitler entered Prague in March 1939, the public mood changed, and Chamberlain found himself a prisoner of a new mood which forced him to make a tactical and half-hearted attempt to stand up to Hitler for which he had no enthusiasm.