The Gestapo: The Myth and Reality of Hitler’s Secret Police – continued 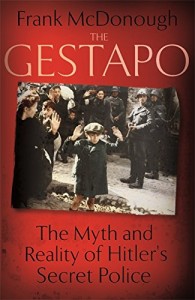 The Myth and Reality of Hitler’s Secret Police

Published by Coronet, an imprint of Hodder & Stoughton, in hardback on Thursday 27 th August.

“A chilling and compelling read” – The Times

Frank McDonough’s The Gestapo is the definitive and profound account of the Gestapo.

Drawing on a detailed examination of previously unpublished Gestapo case files this book relates the fascinating, vivid and disturbing accounts of a cross-section of ordinary and extraordinary people who opposed the Nazi regime. It also tells the equally disturbing stories of their friends, neighbours, colleagues and even relatives who were often drawn into the Gestapo’s web of intrigue. The book reveals, too, the cold-blooded and efficient methods of the Gestapo officers.

This book shows that the Gestapo lacked the manpower and resources to spy on everyone as it was reliant on tip offs from the general public. Yet this did not mean the Gestapo was a weak or inefficient instrument of Nazi terror. On the contrary, it ruthlessly and efficiently targeted its officers against clearly defined political and racial ‘enemies of the people’.

The Gestapo provides a chilling new doorway into the everyday life of the Third Reich and give powerful testimony from the victims of Nazi terror and poignant life stories of those who opposed Hitler’s regime while challenging popular myths about the Gestapo.

“Professor Frank McDonough has unearthed much, drawn from recent research and his own work in the Gestapo’s surviving archives and has blended it in this lucid, authoratative study of the institution and its servants. As for those servants’ villiany, he lets them and their victims speak for themselves: this is a chilling as well as a compelling read… In telling the story of the how the Gestapo worked, McDonough has provided fascinating insights into the experiences of Germans in a fickle and frightening world.
(Lawrence James The Times)”

“Frank McDonough’s myth-busting biography of Hitler’s secret police in no way underplays the Gestapo’s leading role – among several other agencies – in the Holocaust. What it does is question how scary the Gestapo was to the ordinary German who was not a Jew, Gypsy or a homosexual… McDonough is careful to point out that his story is necessarily incomplete because most of the Gestapo’s records disappeared when their HQ in Berlin was blown to smithereens in 1945. What he produces, however, offers real insight into the methods, motives and backgrounds of the men who tried – not that successfully it seems – to police the thoughts of the inhabitants of the Third Reich.
(Marcus Ranner The Independent)”

“It seems incredible that humane qualities could be exhumed from such evil, but that is one achievement of Frank McDonough’s nuanced study… The contribution of McDonough’s illuminating account – based on the 73,000 files at Düsseldorf, the largest surviving collection of Gestapo records – is to reveal that the organisation was neither faceless nor monolithic… Too often historians present material of this vile kind in emotive prose, forcing the reader into uneasy agreement with whatever argument they are presenting. Here, by combining a calm tone with a lucid, factual approach, McDonough has convincingly portrayed a system that was highly efficient and profoundly pernicious, but not unequivocally wicked.
(Miranda Seymour The Telegraph)”

“McDonough’s penetrating study of the Gestapo, which challenges established myths- for instance that the Gestapo was everywhere, an Orwellian ‘thought police’ that kept everyone in check and fear, listening for every knock on the door in the middle of the night. In reality, it had fewer than 16,000 active officers to police the loyalty of a nation of 70 million. Its investigations were fuelled by informants, tell-tales in the community, of whom there were no shortage in Hitler’s paranoid Reich… McDonough’s book also reveals, thousands of other Nazi thugs and killers simply kept their heads down, slid back into society and were never properly brought to book. At the Nuremberg war crimes trials, the Gestapo was branded a ‘criminal organisation’ responsible or ‘crimes against humanity. Yet not major collective Gestapo trial was held in the post war period.
(Tony Rennell Daily Dail)”

The Gestapo is getting translated into numerous world languages – here are the covers of the ones that are already published. 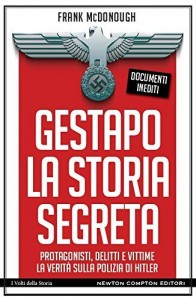 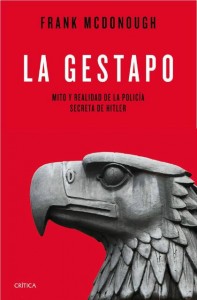 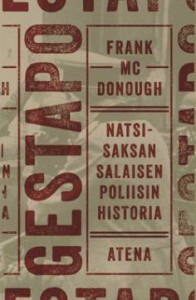 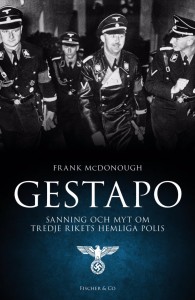 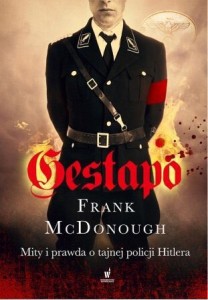 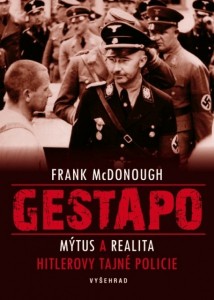 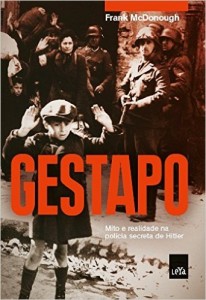 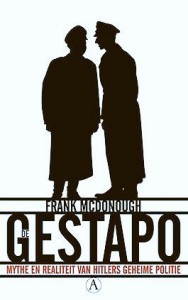 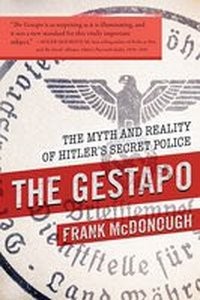 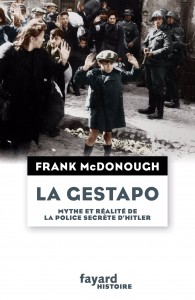