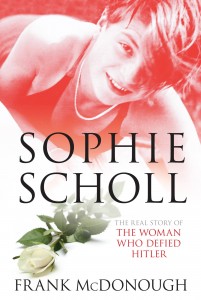 Sophie Scholl was a member of an underground, non-violent protest movement against Hitler’s rule in Nazi Germany called the White Rose (die Weisse Rose). Based at Munich University and consisting of a philosophy professor and his students, it conducted an anonymous leaflet campaign from 1942 to 1943. Drawing on a fascinating variety of sources, including original documents, Frank McDonough tells the dramatic, absorbing and inspirational story of her brave struggle against the Nazi regime and examines her legacy of heroism in Germany. He is the first person to have full access to her letters, diaries and the transcript of her interrogation by the Gestapo. This important new biography shows that not all Germans blindly followed Hitler’s regime, and her refusal to be silent in the face of injustice is a story that deserves to be understood in modern society.